It's been an incredibly busy year but I finally managed to get along to one of the West Cheshire Women's Networking events! It was a great morning and got us all in the festive mood. Merry Christmas and Happy New Year to you all!

You can imagine how delighted I was when this turned up from one of my clients to say thanks for the work I'd done for them! It was a very kind gesture that was greatly appreciated. 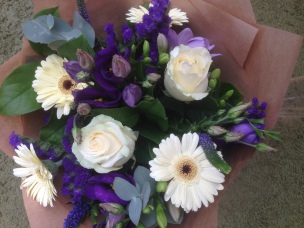 Coaching Culture magazine is nominated for an award!

I've been writing for Coaching Culture magazine since it began last year. You can imagine how exciting it was to discover it had been nominated by the Institute for Organisational Development for its 'OD Publication of the Year 2019' award. So to then go and be awarded the Runner Up position was amazing, especially for a magazine that's only in its first year! 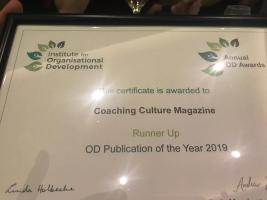 It was great catching up with local businesses at the 2018 North Wales Business Exhibition this month. Sadly my golfing talents were not sufficiently good enough to help me win a bottle of prosecco from Tree Frog Digital but there's always next year... 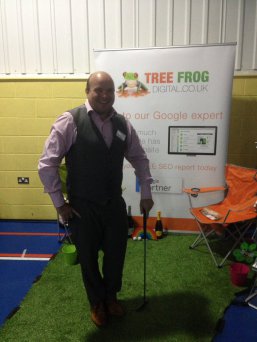 A lovely surprise awaited me in LinkedIn... 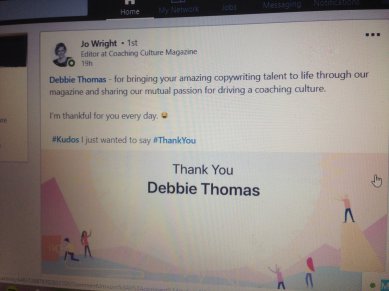 I finally made it to a networking event!

It's been a while but I managed to get along to October's #northwalestweets Tweet Up held at Hawarden Airport's Chocks Away. Another excellent event - and the cakes went down rather well too. 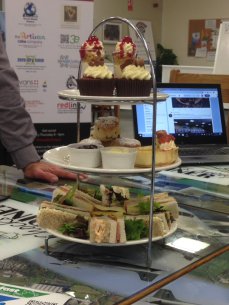 Sorry for the lack of updates...2018 is turning out to be my busiest year yet! Ongoing work for retainer clients has combined with a stream of new clients (including working for a print magazine) and all in all, it's a pretty hectic year. But I wouldn't want it any other way!

Another year almost gone. I can't believe it! Before writing this, I looked through my (not-quite-as-regular-as-I'd-intended) news updates. I was amazed by how recent it all feels but it was good to remind myself about some of the things I've been doing over the past few years. Thank you to all my clients and connections for their support during 2017. I hope everyone has a wonderful Christmas and I wish you all a happy, healthy and successful 2018. 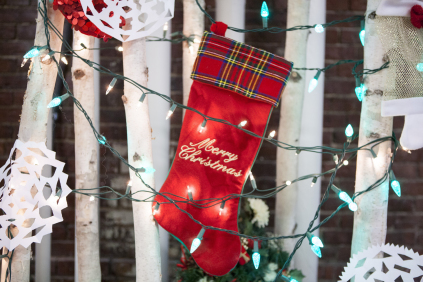 I was pleased to help out my friends from North Wales Hour and charity North Wales Dragons with a press release for their twitter workshop that took place at the start of the month. And at the end of June during a Chamber networking event I had the pleasure of listening to a talk from the owner of Anglesey Sea Zoo, Frankie Hobro, about Menai the Turtle's travels. There is a definite animal theme coming through at the moment!

Just when I thought things couldn't get any busier, 2017 happened. So sorry for the lack of recent updates. But I was very pleased to finally find time to get along to a North Wales Hour Tweet Up at the Regus offices in Broughton. They're held every month at different locations and they are a great way to meet local businesses.

What an amazing night. The gala evening was a sell out with many local businesses coming together to raise funds for this important charity. Entertainment was provided by the extremely talented Tom Spence - you can read more in one of my pre-event press releases.

Working with James Caan and his Recruitment Guide team

It was very exciting to come face to face with business entrepreneur and Dragon’s Den investor James Caan (well, almost face to face - Skype and Zoom) and to be asked to do some copywriting work for him. I also had the pleasure of joining in with some of his Recruitment Guide team meetings and finding out more about the world’s first recruitment hub that he launched in 2016. It’s well worth checking out if you’re in the recruitment industry - go to www.recruitmentguide.com if you’re thinking about recruitment training and consultancy. 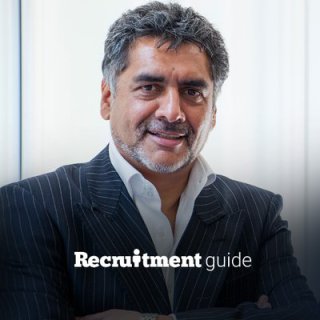 I find it amazing to think a year has passed since I was last at the Flintshire Business Week exhibition! Time goes very fast (and that's my excuse for failing to keep this News section as up to date as perhaps I should...). It was great to see so many of my clients and friends there - sometimes my job really doesn't feel like work at all. 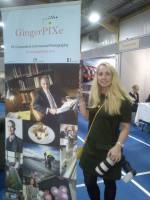 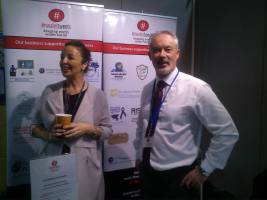 Delighted to be helping with publicity for The Green Pages' charity fundraising gala evening taking place on the 4th November at Chester's Crowne Plaza Hotel. For ticket information visit www.mygreenpages.co.uk. 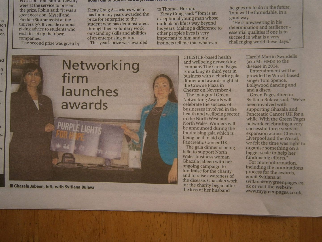 Having met entrepreneur Alison Hitchen via #Chesterhour, I was really saddened to hear about the sudden death of her boyfriend and business partner John Wilkins. But she's doing something amazing as a result of it by donating 10% of all sales from her business FAB Accessories to Wythenshawe Hospital and Grangewood Copywriting was proud to do its bit by helping Alison out with PR for her campaign. 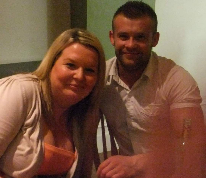 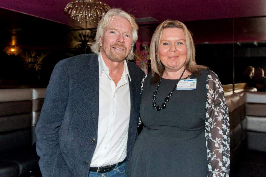 A great start to the year - Blog of the Week!

A great start to 2016 with an HR client telling me that an article I've written on their behalf was Blog of the Week on a leading industry website! 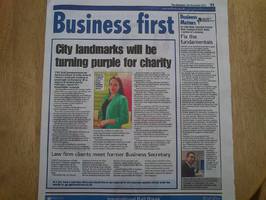 Lighting up Chester to raise awareness of pancreatic cancer

I'm proud to be part of a team helping the amazing Ghazala Jabeen with her fundraising in aid of Pancreatic Cancer UK. Chester Cathedral is even being illuminated purple - read on for the full story...

Svitlana Bulava of The Green Pages and Debbie Thomas of Grangewood Copywriting have donated their time to set up and promote the Green networking and lunch fundraiser which takes place on Wednesday 18th November at Chester’s Macdonald New Blossoms Hotel. The lunch is sponsored by the hotel and is one of The Green Pages’ biggest networking events of the year. All proceeds from the event will go to Pancreatic Cancer UK.

November is pancreatic cancer awareness month and the lunch fundraiser forms part of the UK charity’s national Host for Hope events. On the same day, Chester Cathedral will be bathed in purple lights in support of the international Lights for Hope #purplelights campaign which will see the illumination of iconic landmarks including Niagara Falls to help raise greater awareness of the disease.

Ghazala’s fundraising efforts stem from the tragic loss of her husband Harold Martin Swindells (aka Mr HMS) to the disease just over a year ago. His wish was to help make a difference to anyone affected by pancreatic cancer through fundraising and by increasing people’s awareness of the symptoms of the disease which has one the lowest survival rates of all cancers.

At the event Ghazala will be sharing her emotional story of Martin's bravery and her campaign to help those affected by the illness. She will be joined by medical herbalist and nutritional therapist Natalia Kerkham who will be talking about symptoms and prevention.

Local businesses are invited to join Ghazala and the Green Pages as well as the Sheriff of Chester Cllr Alex Black and the Sheriff's Lady Mrs Janet Black who will be attending the event. There will be healthy lifestyle exhibitors and networking opportunities along with a raffle in aid of the charity. Any donations of prizes beforehand from local businesses would be greatly appreciated.

Event co-organiser and The Green Pages founder Svitlana Bulava says ‘I was really moved by the emotional but ultimately inspirational story of Ghazala Jabeen and the campaign she runs to make a difference to anyone affected by pancreatic cancer.  I hope the local community and business owners will get involved and support us by coming along to the lunch. We’d really appreciate guests wearing something purple at the event as another way of showing their support.’

Debbie Slee, sales manager at Macdonald New Blossoms Hotel, says ‘I was inspired by Ghazala's strength when I met her especially given all that she has been through. Pancreatic cancer is one of the less well-known cancers so the hotel is delighted to become involved and help put on this great event which will hopefully go towards increasing awareness of the disease.’

The networking and lunch takes place between 10am and 1pm and booking is essential. Tickets are £25 per person and cover admission, all refreshments and lunch. To book, find out more information about the event, enquire about exhibiting on the day or to donate raffle prizes please contact organiser Svitlana Bulava at svitlana@mygreenpages.co.uk.

I had a great time at last week's Flintshire Business Exhibition held at Deeside College. I bumped into quite a few current clients (including the team from Jackson Fire and Security pictured below) as well as meeting a few more who have now become clients which was fantastic as I wasn't even exhibiting. If you are looking for ways to promote your business I'd definitely suggest you consider going along to the Business Exhibition next year. I'll see you there! 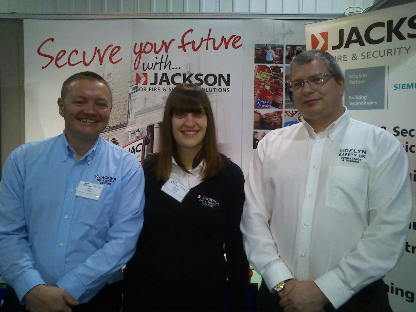 Having attended quite a few events with Chester Women's Network (now known as the West Cheshire Women's Network) which are co-hosted by the Chamber (along with Cheshire West & Cheshire Council, Natwest Bank and Ellis & Co) I'm delighted to say Grangewood Copywriting has now become a full member! I've heard so many great comments about the Chamber and the support it offers its members so I'm really looking forward to being part of its network.

When Grangewood Copywriting launched, I didn't know whether there would be a high demand for HR copywriting services. As it turns out - there's been huge demand! Which is great news for me and hopefully also for my clients who've felt the benefit of using my services.

From newsletter content to policies and procedures, from HR SaaS software to employment law, the breadth of subjects I've been writing about has been incredible. And far too diverse to list - so if you have any HR copywriting requirements and would like to have a chat in case I can help you, do give me a call.

Do you need help with your PR and marketing?

It's been a busy few months helping clients with their PR and marketing and it's been extremely gratifying seeing Grangewood Copywriting's press releases appearing regularly in the local papers and various publications (sometimes even two on the same page as below!). If you need to generate some publicity for your company, do get in touch. 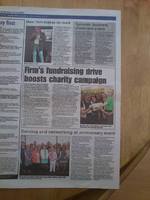 It can't be March already?!

I am aware of the irony of the fact that I am so busy writing content for all my clients' websites I never seem to find time to update my own! So much for my plans to do a post at least once a month. But in my defence it has been a really busy start to the year including attending several of my favourite Chester-based networking events. And as proof here's a photo of me in action... 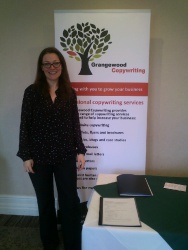 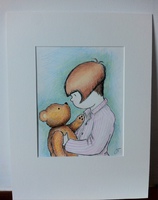 Grangewood Copywriting on the airwaves

I was delighted (and yes, a little bit nervous) to be asked to go on the Knowing your Business Radio show on the 19th September. The subject was ‘Business Training – who needs it?’ and I joined Joy McCarthy from the Copywriting Apprentice in a live discussion on the value of becoming professionally trained in the field of copywriting. You can listen to the podcast here. The Knowing your Business show has had some great guests on recently, so be sure to listen to some of those podcasts as well.

If you'd like a chat about any copywriting you need, please do get in touch. I'm always happy to put together some initial ideas and give any advice I can. Although I'm based in Flintshire, north Wales, I work for copywriting clients all around the UK.

Get social with us.